Known largely for their diminutive size and their ultra-rapid wing movements, hummingbirds can be surprisingly aggressive. In addition to being territorial, these birds are known to take quick and decisive action whenever they feel threatened or whenever the feel as though their territory is being challenged. Moreover, despite their incredibly small size, they have a number of highly effective threats and weapons that they can use in their defense. If you’ve recently put nectar out in a feeder, in an effort to see more of these intriguing creatures in your yard, you’ve likely experienced a considerable amount of hummingbird fighting & aggression. Following are a few things that you might want to know about these often surprising behaviors.

These birds use a tremendous amount of energy throughout the day. As such, much of their lives are spent feeding and looking for viable sources of food. It’s not surprising then, that they’re very territorial. Once they’ve honed in on a good energy source, they certainly won’t want to share it. Their aggressive behavior is a natural survival mechanism. If they don’t get the food and energy they need, they’ll have a much harder time evading predators, and performing the rapid wing movements that they’re best known for. 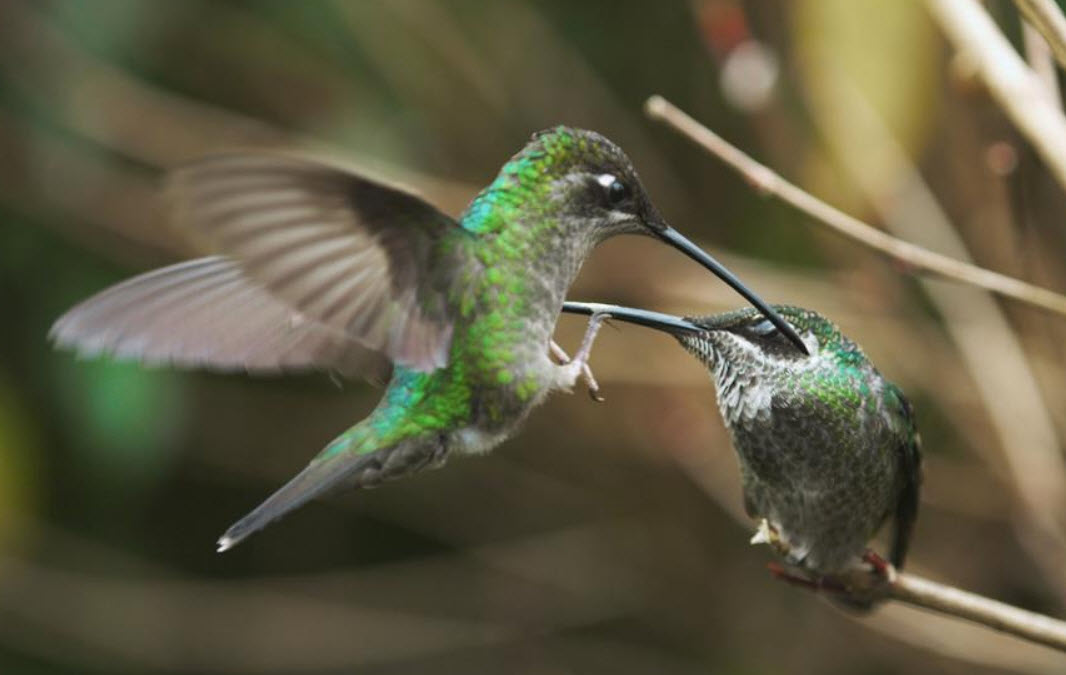 They cannot afford to share feeders and flower, particularly in regions and at times when blossoms and other food sources are few and far between. Without the help of humans, they sometimes have to fly incredibly long distances to find what they need after local nectar stores have been depleted. They’re behavior is the perfect example of “survival of the fittest”. More often than not, when nectar stores are low, the most aggressive birds will have the highest chance of survival.

It is also important to note that these same behaviors are likely to rear their heads even when there are multiple hummingbird feeders filled with nectar in the vicinity. It is just part of who they are. They’re natural response to having their territory impinged upon is so deeply ingrained that they have a hard time viewing feeders as being any different from local blossoms.
they’ll be much happier, too.

Why Do Hummingbirds Fight Over The Feeder?

Fighting over the feeder is part of their nature; just as it’s part of their nature to lash at out competing hummingbirds when it comes to nectar-rich blossoms. There are, however, certain setups that can actually encourage fighting. For instance, if you didn’t know much about the natural behaviors of these creatures when shopping for a garden feeder, then you may have purchased an option that has multiple ports, rather than just a single one. A bullish, bully-ish hummingbird can become territorial over a multi-port feeder, but can be easily discouraged from charging at other hummingbirds through the hanging of several, single-port feeders. This will give multiple hummingbirds the chance to load up on energy in your yard, without creating the potential for a major fight.

Are Hummingbirds Friendly To Humans? 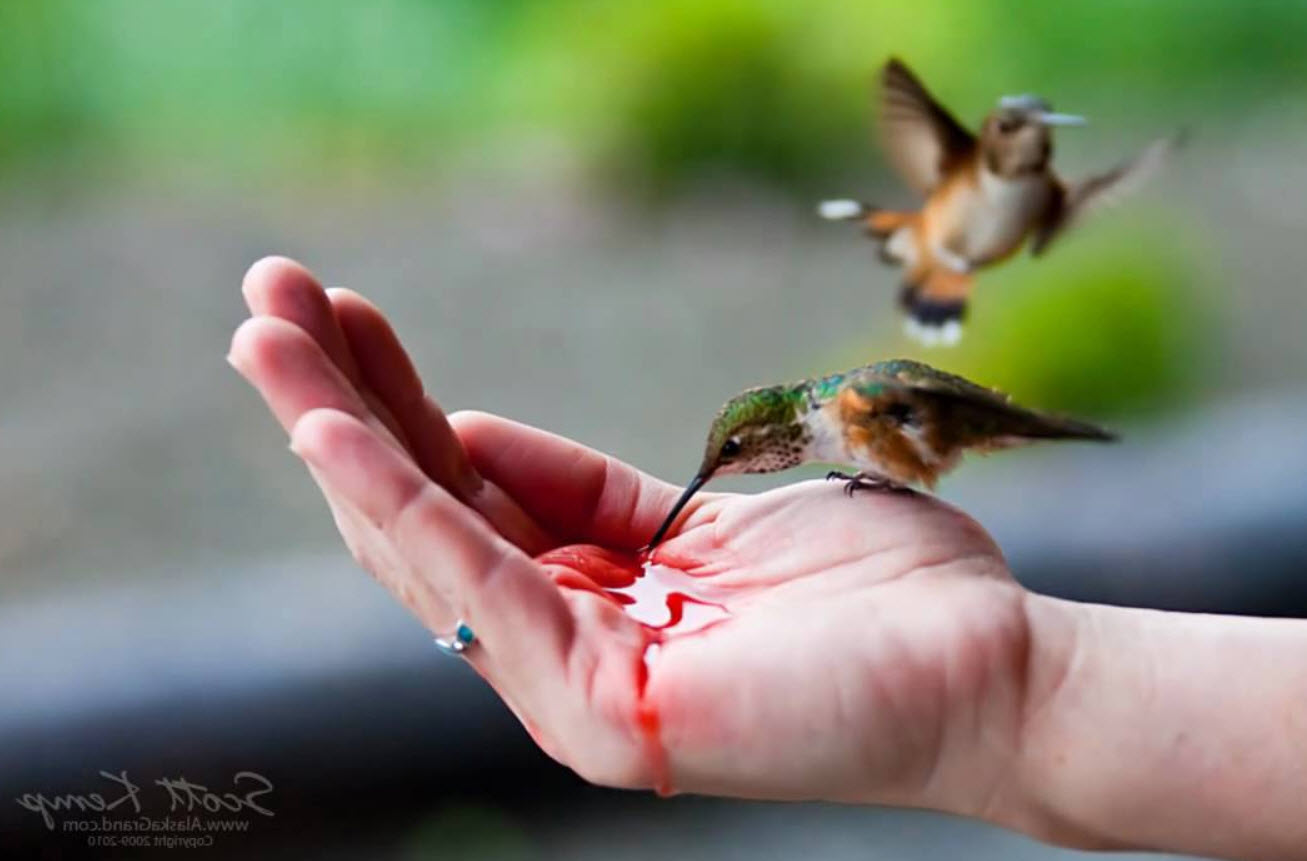 Hummingbirds are not known to attack humans. Even if they did, they are so small in size that there is very little harm that they can actually cause. More importantly, these birds know that they are quick enough to simply flit away should any serious threat from humans ever arise.

If you have feeders in your yard, however, their natural curiosity might lure them in. They’ll come right up close to you if you are still enough. Any quick and sudden movements will invariably send them flying away. If you like watching them in action up close, think about hanging feeders closer to the area where you like to relax outdoors.

When hummingbirds grow accustomed to using outdoor feeders, they may become slightly aggressive when the feeders is empty or while they are waiting for it to be filled and rehung. In fact, you may have the experience of having one of these birds flit right up close to your face, chirping noisily all the while. This is basically a demand for nectar and a not-so-subtle way of telling you to hurry up. 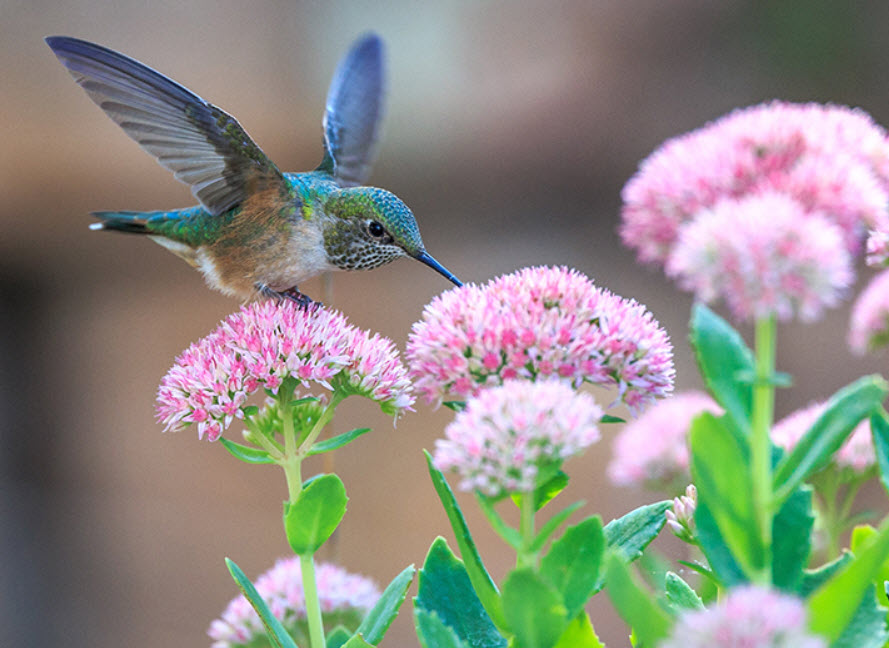 One of the most important things to know about hummingbird fighting & aggression is that these characteristics are most likely to rear their heads in feeding areas and during breeding season. Anytime a bird feels as though its feeding area is being encroached upon, it will lash out with posturing, special flight maneuvers, and daring chases. This is something that you’re most likely to see among male birds around feeding areas.

Females tend to be most aggressive around their nests and during breeding season. You’ll find that aggression is generally at its highest during late spring and the earliest weeks of summer. This is the time when hummingbirds are busy claiming territory, seeking mates, creating nests, and defending nesting areas.

Another very important thing to note is that although all hummingbirds are prone to showing some manner of aggression when defending perceived territory, there are certain species of hummingbirds that are notably more aggressive than others. The absolute worst temper among these creatures belongs to the rufous hummingbird. They have the highest likelihood of displaying anger and picking fights. If you have rufous hummingbirds in your backyard, you’ll want to make a special effort to keep these birds separated at feeding areas. Not only will this limit unseemly displays, but it will also allow you to enjoy more birds throughout the day. For instance, you can try hanging four separate, one-port feeders throughout the space, and a suitably distance apart. This is far preferable to having just one, four-port or eight-port feeder as it gives multiple birds the opportunity to feed comfortably and without feeling the need to defend individual territories.

Bear in mind that displays of aggression can be incredibly common in spring, rufous hummingbirds can continue being angry and fight-prone well into the fall. This is also true of any hummingbird that is gearing up for migration. Wintering birds tend to be more adaptable to the local climate and less likely to fight over perceived shortages. Conversely, birds that know that they have many miles ahead of them are eager to load up on and protect as much of the available energy stores as they can.

How To Stop A Bully Hummingbird 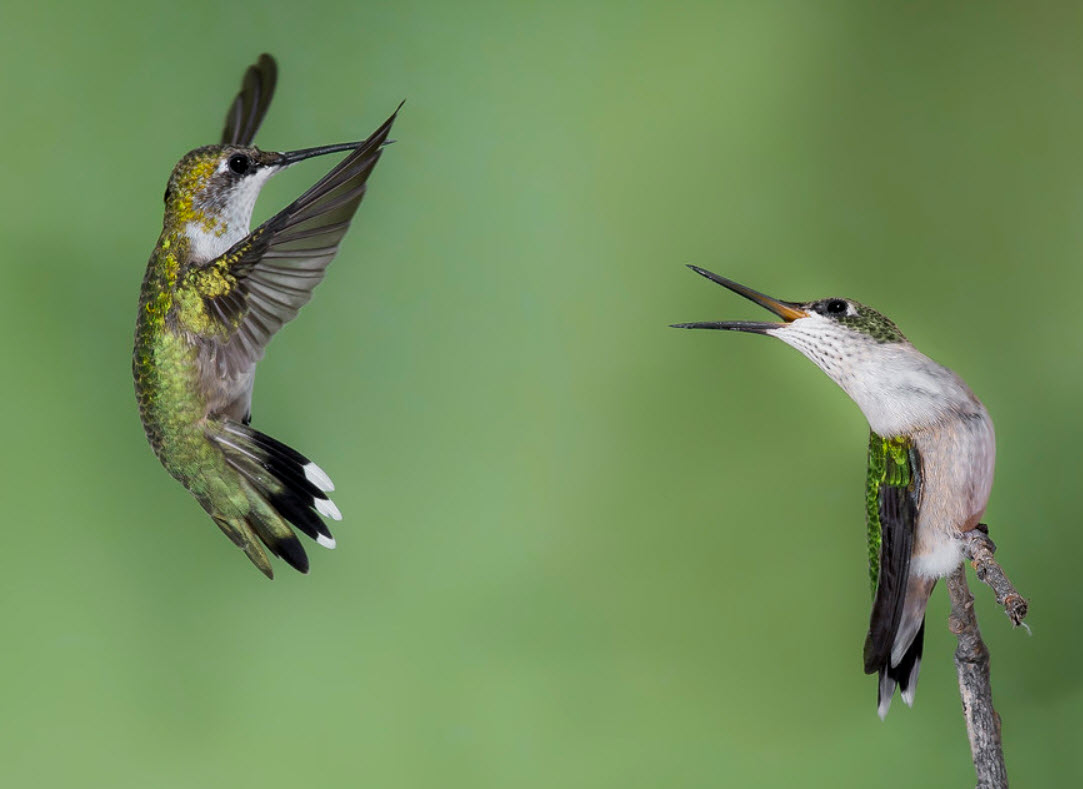 Having several, single port feeders is a great way to deal with the inherently aggressive nature of birds that visit your yard. You may, however, have the unfortunate experience of having a single male bird attempt to dominate all of the nectar stores in your yard. Surprisingly, this isn’t all that uncommon. Moreover, if multiple male birds with the exact same disposition move into the area, you might have four separate feeders that are dominated by four bully-ish birds. These bullies will actually crash down into other hummingbirds whenever they stop by to feed. Ultimately, repeated smacks will gradually drive less aggressive birds off. This can be especially bad during the cooler months of the year when local, wintering birds rely heavily on the homemade nectar that you put out for their essential energy stores.

In this instance, your best bet is to group all of your feeders closely together. This will prevent individual males from claiming and setting up their turf. This strategy can be particularly effective in the late spring and summer. As more adult and young birds come in to get their fill, bullies will get overwhelmed by the crowds and grow tired of wasting energy on their aggressive dives and other flight displays. Within a very short while, they’ll eventually give up and allow everyone to eat in relative peace.

Although you certainly can’t deter the very nature of these animals, there are a few things that you can do to prevent hummingbird fighting at your feeders, and throughout your yard in general. To start, be cognizant of the season. For instance, it may be that fighting is the result of breeding season and various natural efforts to mate, build nests, and protect nesting areas. At other times, you might simply have a particular aggressive or bully-ish species of hummingbird in your yard. In each instance, the best solution will always be specific to the circumstances that are ultimately creating the problem.

Even when the best strategy appears to be grouping your feeders closely together, make sure that there is ample space between each one for birds to come in for a safe landing. This simple step can stop fights before they get started by ensuring that feeding birds do not feel as though they are being crowded or pestered.

When using multiple, single-port feeders to prevent territorial displays, place one in each corner of the yard. When feeders are spaced sufficiently far apart, most hummingbirds will hardly notice that there are others around. If you find that each of your feeders is being dominated by a single bully, however, go ahead and clump them together. Even the angriest and most aggressive birds won’t be able to drive large crowds off on their own. If a single bully keeps stopping by and causing problems, take away his or her favorite perch. You should also be cognizant of outside sources of aggression, such as when feeders have been hung too close to a favorite resting space of a cat or other household pet.

How Long Do Hummingbirds Live?

Where do hummingbirds live?

How Long Do Hummingbirds Live?

Where do hummingbirds live?