The Rufous Hummingbird is a fairly small hummingbird with a long, straight, and very slender bill. It is considered as the feistiest hummingbird in North America. 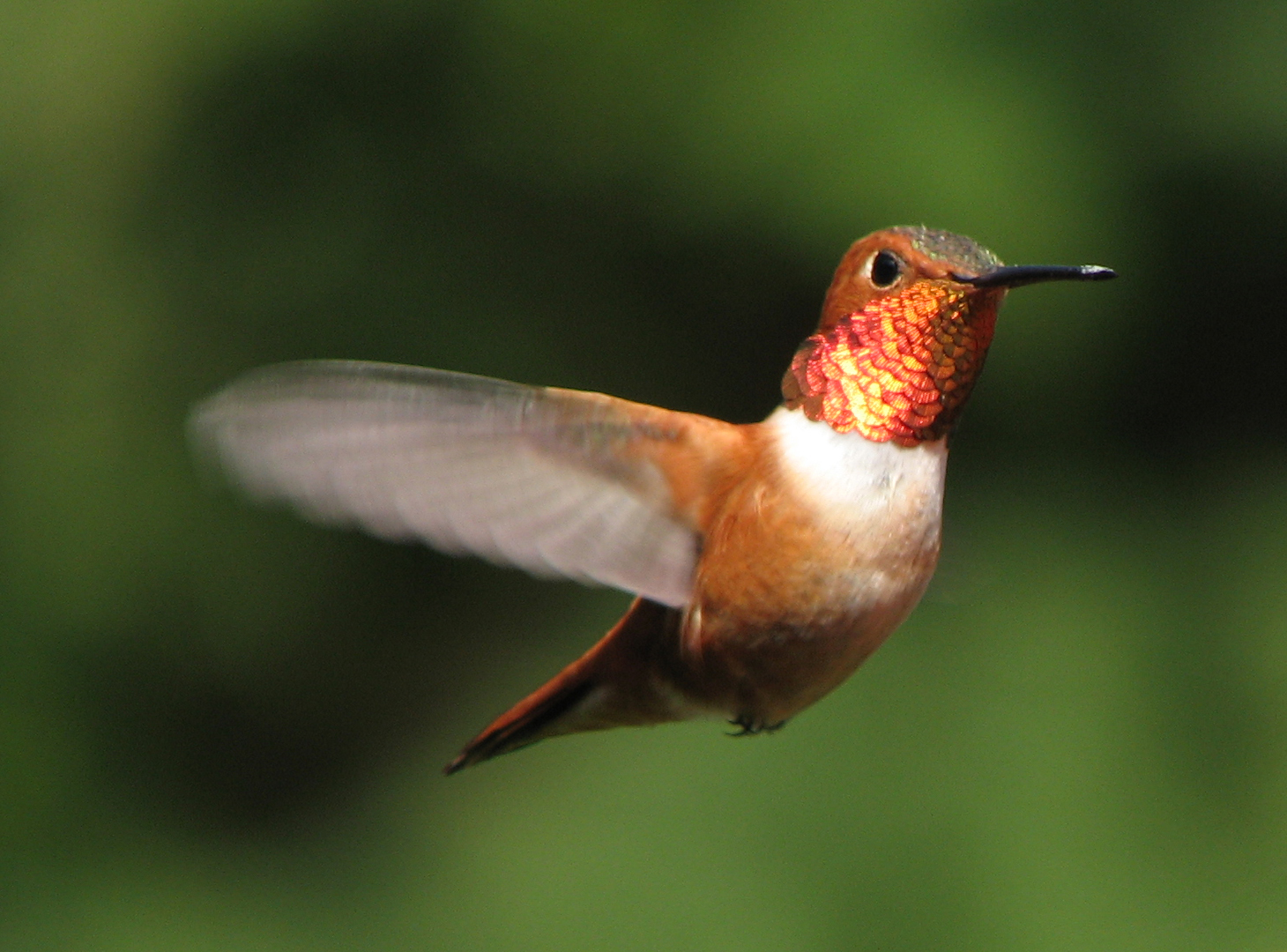 The Rufous Hummingbirds are known for their relentless attacks on flowers and feeders. Sometimes, they would even go after large hummingbirds of the Southwest.

Rufous Hummingbirds have a large breeding range. They would breed father north compared to any other hummingbird. You can find them during spring in California, summer in the Pacific Northwest and Alaska, and fall in the Rocky Mountains.

The Rufous Hummingbird has a narrow, nearly straight bill, a tail that can be tapered to a point when folded, and wings that are shorter than the tail when it is sitting.

Under ideal lighting conditions, male Rufous Hummingbirds showcase a dazzling bright orange color on the back and belly, and a radiant iridescent-red throat. All of the feathers in their back are completely rufous.

The females, on the other hand, have mostly green upper parts, with rufous-washed flanks, rufous spots in the green tail, and most of the time an orange marking in the throat.

The bird’s excellent memory for location helps it in finding flowers regularly. Indeed, they are seen looking for a feeder’s location despite having moved due to migration.

They take small insects from spider webs or catch them in midair. These insects serve as their sources of protein and fat. Some of these insects include gnats, midges, and flies taken from the air, and aphids taken from plants.

The preferred habitat locations of Rufous Hummingbirds are open or shrubby areas, forest openings, yards, and parks. Sometimes, they are also found in forests, thickets, swamps, and meadows in different elevations.

During migration, they can be observed in mountain meadows up to 12,600 feet elevation. The Rufous Hummingbird takes one of the longest migratory journeys of any bird in the world, based on body size measurements. Indeed, its single flight from Alaska to Mexico amounts to approximately 78,470,000 body lengths.

Just like the other hummingbirds, Rufous Hummingbirds are precision flyers. They can fly at ultimately fast speeds and pull off an instant stop. Indeed, they showcase a resolute control of their flight movement. Also, they boast a wingbeat frequency of 52-62 wingbeats per second, which helps them to hover in place.

Rufous Hummingbirds are extremely territorial all-year round. They are often seen as combative birds that would relentlessly chase away other hummingbirds even in places that are outside their breeding range. Aside from large hummingbirds, they would also chase chipmunks away from their nests.

During courtship, male Rufous Hummingbirds perform a steep oval or J-shaped flight when the subject female enters their breeding territory. The female’s perch indicates a shift of the male’s movement to horizontal figure-8s.

The female Rufous Hummingbird constructs the nest using soft plant down held together with spider silk strands. The outside portions of the nest are camouflaged with lichen, moss, and bark. The completed nest is about 2 inches across on the outside and an inner cup width of approximately 1 inch.

The females place the nests up to about 30 feet high in coniferous or deciduous trees. While they are not known to a colonially nesting species, some studies suggest that 20 or more Rufous Hummingbird nests are only a few yards apart in the same tree.

The size of the female’s clutch is 2-3 eggs. And the average number of broods is 1. The incubation period for these eggs last for 15-17 days, while the nestling period runs for 15-19 days.

The oldest known Rufous Hummingbird has a lifespan of 8 years and 11 months.

The Rufous Hummingbird has a ‘Least Concern’ conservation status under the IUCN Red List.

According to the North American Breeding Bird Survey, there has been a significant decline in the population of Rufous Hummingbirds from the year 1966 to 2010 of about 62 percent. The global breeding population of the species is estimated to be 11 million, with 100 percent spending some months of the year in Mexico, 52 percent in the U.S., and 48 percent in Canada.