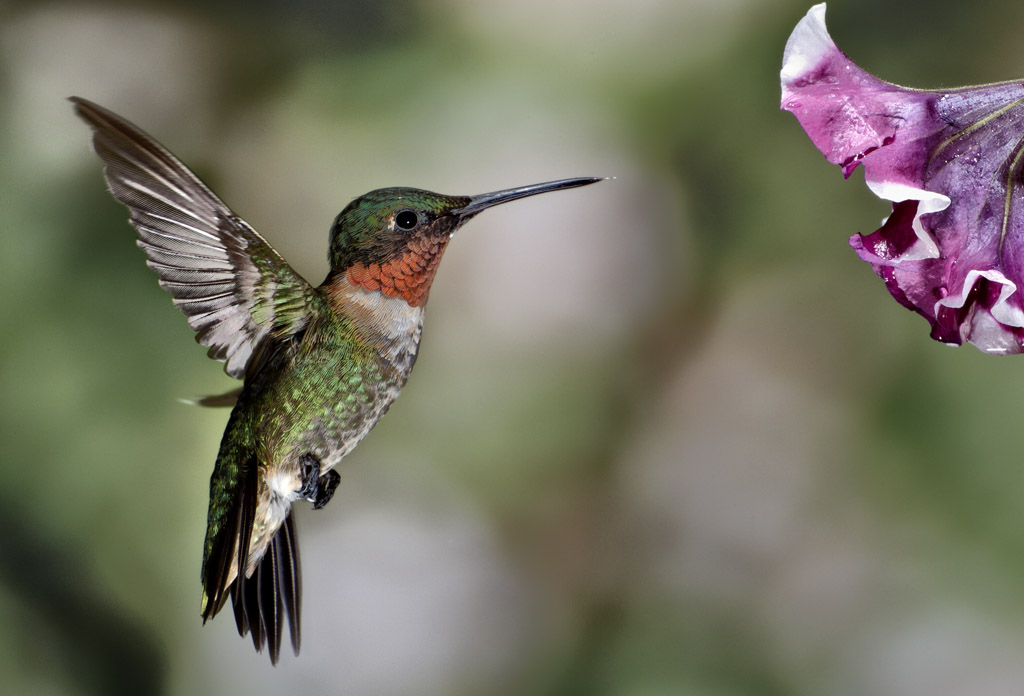 The Ruby-throated Hummingbird grows to a length of 2.8 to 3.5 inches, and a wingspan of 3.1 to 4.3 inches. It can weigh from 2 to 6 grams. The females are a little larger compared to the males.

It is distinguished for having a slender, slightly downcurved bill and fairly tiny wings that are shorter than the tail. The toes and feet of the species are a bit small compared to other hummingbirds.

The Ruby-throated boasts a spectacular color pattern. It has a bright emerald or golden-green back and crown. Its underparts are mostly grey-whitish in color. The wings are nearly black in color.

The males have a dazzling red throat bordered narrowly with velvety black on the upper margin. The throat patch appears blackish when not subjected to good lighting conditions. Also, it has a forked black tail that has a faint violet sheen.

The female, on the other hand, has a notched tail that has interesting green, black, and white color bands. Its white throat may be plain or lightly marked with dusky streaks or stipples. The bills of the females are a bit larger compared to that of the males.

Immature male Ruby-throated Hummingbirds look similar to adult females, although they are shown to have more intense throat markings.

The spices completes one moot every year, which may begin during the fall migration and

Ruby-throated Hummingbirds are often seen approaching hummingbird feeder and tube-shaped flowers. They prefer to eat red or orange flowers, such as trumpet creeper, cardinal flower, honeysuckle, jewelweed, bee-balm, red buckeye and red morning glory. They exhibit their territoriality in defending these food sources against other hummers.

Aside from hovering over flowers, they are sometimes seen plucking small insects from the air or pulling them out from spider webs. Its primary insect prey includes mosquitoes, gnats, fruit flies, and small bees. Sometimes, they also eat spiders.

The preferred habitat locations of Ruby-throated Hummingbirds are open woodlands, forest edges, meadows, and grasslands. They are also observed in parks, gardens, and backyards.

During winter, Ruby-throated Hummingbirds would live in dry forests, citrus groves, hedgerows, and scrubs in Central America. However, as migratory birds, they would already move to eastern North America during summer.

The Ruby-throated Hummingbird’s very short legs prevent it from walking or hopping. It scratches its head and neck with the use of its feet.

However, Ruby-throated Hummingbirds are precision flyers. They have the impressive ability to fly straight in fast speeds, while being able to stop instantly, hand motionless in mid-air, and adjust their position with sharp control. It beats its wings at a frequency of 53 times per second.

Moreover, Ruby-throated Hummingbirds are also known for their vocalizations. They produce rapid, squeaky chirps especially when threatened. For instance, a male Ruby-throated may vocalize to signify warnings against another male that has entered its territory.

Just like other hummingbirds, the Ruby-throated Hummingbird is solitary for most parts of its life. Indeed, after courtship and mating, the male will already leave to either migrate or mate with other females.

Males exhibit a courtship display to females that stray into their territories. They would make a U-patterned dive beginning from an elevation of 50 feet above the female in subject. If the female Ruby-throated perches, the males then shifts to making rapid side-to-side flights while facing her.

The female builds the thimble-size nest by using thistle or dandelion that are connected together using spider silk strands. Sometimes pine resin is used as a substitute to the spider strands. The nest’s exterior is camouflaged with pieces of lichen and moss. It takes about 6-10 days for the female to finish the nest. The finished nest is 2 inches across and 1 inch deep.

The female Ruby-throated Hummingbird usually places the nest on a branch of a deciduous or coniferous tree. However, because of these birds’ adaptation to human habitation, they are sometimes seen nesting on loops of chain, wire, and extension cords. The nests are normally 10-40 feet above the ground.

The oldest known Ruby-throated Hummingbird has a lifespan of 9 years and 1 month.

The Ruby-throated Hummingbird is classified under the ‘Least Concern’ category of the IUCN Red List.

Since 1960s, there has been a steady increase in the populations of the species, according to the North American Breeding Bird Survey. The global breeding population of Ruby-throated Hummingbirds is estimated to be 20 million, with majority of them spending some parts of the year in the U.S. or Mexico.

While hummingbird feeders do not pose any significant threat to Ruby-throated Hummingbirds, they can be a cause of concern if they make the hummingbirds an easy target for cats or if the feeders are put around nearby windows that birds might fly into.